Christian Solidarity Worldwide is calling on the Cuban government to allow Reina Luis Tamayo Danger, the mother of Orlando Zapata Tamayo who died in Cuban prison earlier this year, to attend religious services and to cease their harassment of Tamayo Danger and her family.
Since the beginning of August, on consecutive Sundays, State Security agents and other pro-government members of the community in the town of Banes have physically blocked the road taken by Tamayo Danger on her way to church, preventing her from attending Sunday Mass and visiting the cemetery where her son is buried.
Video footage sent out of Cuba shows a line of men in uniform interlocking arms across a dirt road, standing face to face with a small group of women accompanying Tamayo Danger. The women are part of a larger movement across the island known as the Ladies in White, made up of wives and mothers of prisoners of conscience. A crowd of people chants pro-government slogans and shouts obscenities at the women who stand in front of them, unable to pass.
According to Tamayo Danger, for over five months she and her family have been subjected to acts of intimidation from government officials, including verbal abuse and threats of violence. Her weekly attendance at Mass at the La Caridad Catholic Church has been particularly targeted. She says, however, that the violence and intimidation is no longer confined to Sundays. 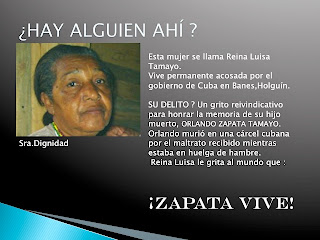 Tamayo Danger requested that the international media to come to Banes to cover the situation. CSW is calling on representatives of European embassies in Cuba to go to Banes to investigate these threats and stand in solidarity with her.
CSW’s National Director Stuart Windsor says, “No one should be subjected to these tactics of intimidation simply because they are attempting to attend a weekly religious service, a right enjoyed by religious believers across Cuba. We are calling on the Cuban government to cease its harassment of Mrs Tamayo Danger immediately and to allow her to attend Mass and visit her son’s grave without hindrance.”
For further information or to arrange interviews please contact Kiri Kankhwende, Press Officer at Christian Solidarity Worldwide on +44 (0)20 8329 0045 , +44 (0)20 8329 0045 , +44 (0) 78 2332 9663 , +44 (0) 78 2332 9663 , email kiri@csw.org.uk  or visit:  http://www.csw.org.uk/.
CSW is a human rights organisation which specialises in religious freedom, works on behalf of those persecuted for their Christian beliefs and promotes religious liberty for all.
Notes to Editors:
1. Orlando Zapata Tamayo was one of 75 prisoners of conscience arrested and imprisoned in March 2003 in a wave of political repression now known as the Black Spring. He went on hunger strike in at the end of 2009 to protest prison conditions. He died in February 2010 after prison officials denied him water for eighteen days, leading to kidney failure, and withheld medical treatment until it was too late. There was an international outcry following his death and he has since become a symbol for dissident groups across the island.
2. Video footage of the events in Banes can be found on Youtube: http://www.youtube.com/watch?v=P5Qz-OB9K94&feature=player_embedded
The footage in this link is freely available to the public. CSW does not take responsibility for the content provided therein. Any views expressed on the website do not reflect those of CSW of its staff.
en 8/17/2010 09:36:00 a. m.