Pastors for Peace, a quarter century of be supporting the regime of military Communists of Cuba.

Pastors in 26: peace people celebrating the assault on a military barracks
By José Antonio Fornaris
Havana, Cuba, July 2013. - . Pastors for peace, the Organization of religious of the United States that focuses on collecting different items for donation to the Government of Cuba, is visiting the island again.
It is the tenth fifth occasion on which those pastors come and already in Santiago de Cuba to participate in public events to mark the anniversary of sixty of the Carlos Manuel de Céspedes, Moncada barracks attacks, and taking of the provincial Saturnino Lora civil hospital. 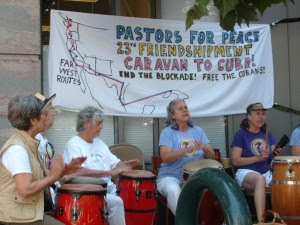 As it is well known, those war episodes were those that gave home to violent itinerary that Fidel Castro and his followers began on July 26, 1953.
Don't need any arguments to prove that nothing peaceful is attack with deadly force and surprisingly two military centers and take a hospital, something unusual in any warfare, for thence shoot against the counterforce that didn't even know that it had been declared enemy.
So, the question is very reasonable: what makes a person who proclaims peace celebrating a bloody act of war?
Since Castro and his followers took power, more than 54 years ago, the symbolic White Dove became a rare avis.
Therefore, if the so-called pastors for peace are allies that regime stalwart, the answer is obvious: only peace lovers have the name. 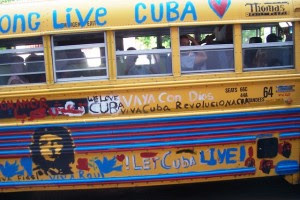 One of the paradigms of these people is Ché Guevara. Some of the buses of second hand that that group has donated to the Government of Cuba, passing through the cities of the island with the image of the "heroic guerrilla".
And Guevara, know it all, never was in favor of peace. The greater part of his life was a cry of war, at the same time that left well explicit its philosophy to jump-start the peoples: hate.
In the early days of its arrival to power, Castro denied over and over again, emphatically, be communist. He then justified this attitude saying was how to protect the win because the people had a bad opinion of communism.
After a quarter century of be supporting in a public way the regime of military Communists of Cuba, what obvious is that these pastors are not Christians or peace-loving. At least, is the reading of their activities.
en 7/25/2013 08:48:00 p. m.