Marites N. Sison.
The relationship between church and state has “positively changed” in Cuba in recent years, and there is “more space” for churches to engage in social work, according to Rev. Reinerio Arce, principal of the Evangelical Seminary of Theology in Matanzas, about 100 kilometers from the capital Havana.

The state understands that social mission is part of the church’s commitment,” said Mr. Arce, who recently briefed the Anglican Church of Canada’s staff at its national office in Toronto about the church in Cuba. “The church is also seen as a moral agent.” (The Anglican Church of Canada, together with the Presbyterian and Methodist churches, helps to fund the seminary that Mr. Arce heads.) 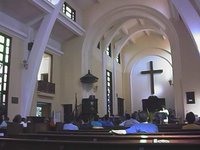 
Mr. Arce traced the positive developments to the 1990s, when Cuban President Fidel Castro’s views about religion were discussed in the book, Fidel and Religion: Conversations with Frei Betto. The book, a product of 23 hours of wide-ranging conversations between the Cuban leader and the Brazilian priest, became a bestseller in Latin America when it was published in 1990. The book discusses, among others, Mr. Castro’s childhood and education in Catholic schools.
In 1998, Mr. Castro also said in a speech, “I feel a great respect for all religions. The Christian religion was the one I best knew, for I spent 12 years – as some of you probably did too – as a boarding student in religious Catholic schools.” He added that revolutionaries need “basic humanist values,” some of which could be found in religion.
Mr. Arce said Mr. Castro’s affection for the late Pope John Paul II was also no secret. Mr. Castro had invited the pope to visit Cuba as early as 1979, when the religious leader condemned the American embargo on trade with Cuba. In 1998, the Pope finally accepted an invitation to visit what Mr. Castro had pronounced a “secular state.” Some issues do remain, said Mr. Arce, including the need to construct new churches in Cuba.
Christians account for about 10 per cent of Cuba’s 11. 3 million population; a majority of Cubans are followers of Santeria, an Afro-Caribbean religion.
Meanwhile, Archbishop Andrew Hutchison, primate of the Anglican Church of Canada, his wife, Lois, and Archdeacon Michael Pollesel, the national church’s incoming general secretary, were scheduled to travel to Cuba Jan. 31 to Feb. 5. While in Cuba, the primate was scheduled to chair a meeting of the Metropolitan Council of Cuba (MCC), attend the annual synod of the Episcopal Church of Cuba, and the extraordinary synod. The MCC is the official body that ties the Episcopal Church of Cuba to the Anglican Communion. It was created in 1967 when Cuba lost provincial status in the Episcopal Church in the United States (ECUSA) due to the break in relations between the U.S. and Cuba after the Communist takeover in 1959. The Canadian primate is president of the MCC, which also includes Archbishop Drexel Gomez of the Church of the Province of West Indies and Bishop Lloyd Allen of the diocese of Honduras, who is also an ECUSA Episcopal appointee.
Foto Izquierda: Rev. Reinerio Arce
Foto derecha: interior de la Iglesia Episcopal –Anglicana en La Habana.