By: Johanna Thomas-Corr.
A prominent blind Christian human rights activist in Cuba has endured severe harassment in the last week, a human rights organization has said. Juan Carlos Gonzalez Leiva, who was imprisoned in 2002 for protesting against human rights abuses, says he believes that the harassment is a bid to make him leave the country when he completes his four-year sentence on March 12. Juan Carlos’ treatment by Cuban authorities is the latest incident of human rights violations under Fidel Castro’s regime. 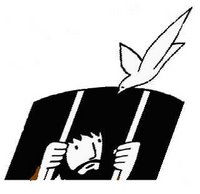 Christian Solidarity Worldwide, a human rights organization, has said that Juan Carlos – who has spent the last two years of his sentence under house arrest — claims the government has denied him basic amenities. In a letter written on January 14, Juan Carlos wrote: “They [the Cuban authorities] prevent me from leaving my house, and I am without food, drinking water and electricity. We are suffocating from the heat. On occasion, they randomly restore my telephone, but most of the time I remain unable to make contact with the outside world.”
He has also said that crowds gather around his house chanting pro-government slogans and playing loud music at all hours of the day. “These people shout threats at us, saying that they are going to enter the house with military tanks, that they are going to burn all of us up, and that we are anti-social persons at the service of imperialism, among other things.” Juan Carlos was arrested in March 2002 after organizing a protest in a hospital at the mistreatment of a journalist who had been beaten up by the Cuban police. He and nine other protestors were badly beaten and then arrested by Cuban security forces. Stuart Windsor, CSW’s National Director, said: “The Cuban authorities’ mistreatment of this courageous human rights activist should outrage the international community. He has already suffered years of mistreatment in prison and as his sentence nears an end, he is being severely harassed in a bid to make him leave the country.”
CSW last week reported that at least three Protestant churches had been forcibly closed down in Cuba. The closures follow legislation affecting house churches which was announced last year. The new legislation, Directive 43 and Resolution 46, was announced in April in the wake of Pope John Paul II’s funeral, and required all house churches to register with the authorities.
Church leaders expressed their concern at the time that the registration process was so complicated as to be practically impossible. Many say that this was actually an attempt to shut down the house church movement across the island. It is possible that additional churches have also met with a similar fate but because of security concerns regarding communication in Cuba, aid agencies say this has been impossible to verify.
However, the country’s democracy movement has recently rebounded, with numerous protests against the power of Castro’s Communist regime, and what seems to be a new wave of repression of religious freedom on the horizon. There have been planned meetings of independent civil society groups to address the government system in Cuba that has jailed so many.
http://www.churchnewspaper.com/
en 1/23/2006 06:33:00 p. m.