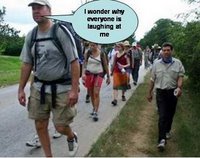 A group of so called "American Christians" is marching in Cuba to protest against torture. But don't think for one minute that they would dare March against torture in Castro's jails, where thousands of Cubans have been tortured for the last 47 years. Not a chance. These false Christians went to the Devil's farm to protest against alleged torture at the American naval base at Guantanamo! Can you believe that crap?
“We are appalled by the conditions, torture and abuse that people are suffering in the custody of the U.S.government, and are trying to perform the basic Christian work of mercy of visiting the prisoners,” said Mike McGuire, spokesman for Witness against Torture.

Yesterday it was the 3rd. anniversary of the date when Dr. Oscar Elias Biscet, a Cuban prisoner of conscience and a real Christian, was sent to jail. He is now reported to be seriously ill and suffering from chronic gastritis and hypertension. The conditions in which he is serving his 25 year prison term - imposed after an unfair trial in 2003 for his non-violent advocacy of human rights - are deteriorating.

Do you think that any of these 'Christians' will ask permission to visit Dr. Biscet or any of the hundreds of Cubans languishing in Castro's Gulag? No, because these people are not Christians. They are rejects of the human race who portray themselves as Christians because they know that by doing so they can still confuse some people.
But they cannot confuse those of us who know the difference between the conditions in Guantanamo and those in Castro's jails and also know the difference between the prisoners being held in Guantanamo, who are accused of terrorist activities, and those in Castro's jails whose only crime wants to be free.

The sign held by this group of morons reads: "Stop the torture, close the base and free the prisoners."

A group of hypocrite cowards that went to Cuba to protest about the condition of the suspected terrorists being held at the Guantanamo Naval Base in Cuba finally reached their destination on Sunday to begin a three day vigil and fast.
"We want permission to see the prisoners and justice for them," said spokesman Mike McGuire by telephone from the United States, where he was tracking the activists' progress.
The group of 25 so called ‘Roman Catholic activists,’ including a nun and a priest, has not said one single word about all the Cubans being held in Castro's Gulag.
The best thing that this group of hypocrites can do is stay in Cuba. Hypocrites like them are a disgrace to America and to the human race!

What a 'wonderful' group

being held at the Guantanamo Naval Base, but who have refused to say one single word in support of the

hundreds of Cubans unjustly being held in Castro's Gulag, include the following set of characters:
A priest, Father Steve Kelly from California, a 79 year old nun, Sister Anne Montgomery from New York

sitting next to him, and three individuals who were convicted of trespassing and damaging government

property, Daniel Burns, Clare Grady and Teresa Grady and are to be sentenced in January.