Dinner with the Dictator and Assassin, Fidel Castro.

Fidel receives representatives of the Catholic Church on the 70th anniversary of relations between Cuba and the Holy See. 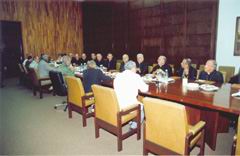 TO commemorate the 70th anniversary of the establishing of uninterrupted diplomatic relations between the Republic of Cuba and the Holy See, last night President Fidel Castro, accompanied by other Party and government leaders, received Monsignor Luigi Bonazzi, the papal nuncio and the Holy See representative to the Cuban government, and members of the Conference of Catholic Bishops of Cuba, headed by their president, Cardinal Jaime Ortega Alamino, Archbishop of Havana. Other figures from the Catholic Church in our country were also present.
The meeting, which took place in a constructive and cordial atmosphere, was followed by a dinner during which points of mutual interest were discussed, in line with the atmosphere bequeathed to our country, the world and his own Church by Pope John Paul II, the indefatigable fighter on behalf of ecumenicalism, unity and cooperation among the diverse religious denominations, against poverty and for peace in the world.
During the exchange, recalling the Pope’s visit to Cuba, the president affirmed that the grandeur of Jon Paul II was his genius for seeing and understanding the problems of the present-day world.
This meeting was the culminating point of activities organized in this country for the 70th anniversary of relations between Cuba and the Holy See.